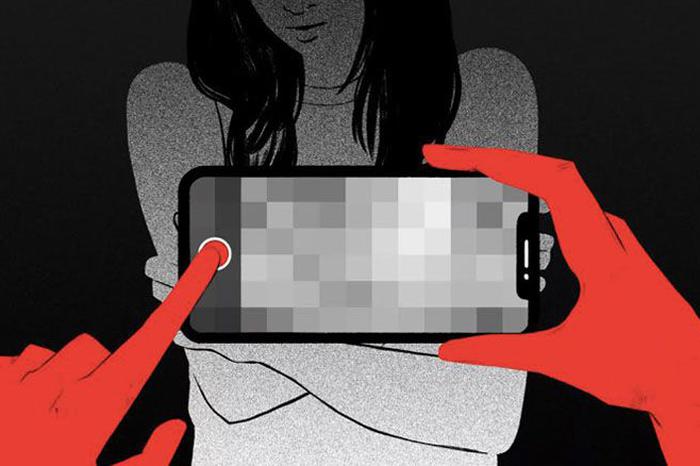 In March of 2018, in the case of State of West Bengal v Animesh Boxi, which is widely considered the first-ever, the Sessions court in Tamluk, West Bengal, sentenced a man to five years imprisonment along with a fine of Rs. 9,000, for uploading private and objectionable pictures of a girl on the internet without her consent. The accused was convicted under Sections 354, 354A, 354C and 509 of the Indian Penal Code along with Sections 66E, 66C, 67 and 67A of the Information Technology Act. What was interesting about the judgment was that along with the aforementioned fine and imprisonment, the courts even directed the state government to treat the victim as a rape survivor and to provide her appropriate compensation.

Women in India perpetually suffer from being subjected to crime and sexual violence in their daily lives. Digitization in India has brought an increase in technological power and access to technology within the country leading to a subsequent increase in the instances of harassment and crimes in the virtual world. Such crimes termed as cyber-crime have evolved as a major predicament that the law enforcement agencies in the country and around the world are struggling to address and the lack of laws to adequately address the same make the process even harder.

Another problem that is faced by law enforcement is that such crimes usually go unreported due to social issues and stigmas. According to Adv. Bivas Chatterjee, who was the Public Prosecutor in the West Bengal case, “98 percent of cyber-crime victims do not even lodge a complaint as the victims, who are usually women, fear they will get identified and labelled in society. Hence along with the legal and logistical issues, prosecution for the crime is also affected by the lack of reporting of such incidents.

Additionally, other laws also have their application in such situations such as Section 4 and 6 of Indecent Representation of Women (Prohibition) Act, 1986, (IRWA) which prevents publishing of photographs (among other things) which contain indecent representation of women. Further additional provisions of various statutes may also be used depending on the facts and circumstances of the given cases.

As can be inferred prima facie from a reading of the section, while the section can be used to prosecute offenders,[iv] it also can lead to the possible prosecution of the victim as well who may have voluntarily taken the said pictures or videos and sent the same to their partners.[v] A similar issue is also seen in the case of Section 67 of the same act which deals with the offence of publishing or transmitting obscene material in electronic form. This can be quite problematic as the same section the victim is relying on to obtain legal relief could be used to prosecute him/her.

It is clear that while courts and the legal system are attempting to help provide justice to victims of such crimes, other provisions of the laws could possibly stifle their efforts. This could also further affect the access to justice to victims of such crimes who already being burdened by societal pressures and stigmatisation, may further choose not to report the same to prevent being prosecuted (as the law has no regard for the consent of the receiving party). While the provision of the law is required to prevent the unsolicited sending of pictures, the same must take into consideration the consent of the opposite party in receiving the same, especially in a romantic/interpersonal relationship between parties. Another possible solution is for new laws to be made which adequately address such new issues which are emerging in the virtual world and which are not gendered in nature. Without such changes being implemented, the contradictions in the legal system would perpetuate and prevent victims from conclusively obtaining justice.